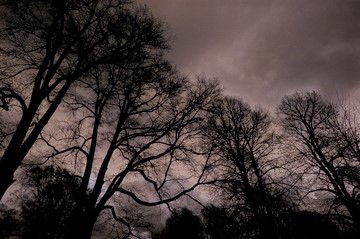 I’ve never told anyone this before, and I don’t know for certain what it was I saw, but I’ll tell you what happened anyway.

A couple of years ago, I was taking the Wicklow-Dublin train, it was summer, around dusk. Dark outside, but not so dark I couldn’t see. The train was sat at Wicklow station, just waiting to depart and I was looking out the window at those big trees on the west side which overlook the tracks. I don’t know what kind of trees they are, but anyhow, right up the top of the second to biggest tree was perched 3 ‘creatures’.

I could make out their form and definitely see their eyes because they were glowing red. At a guess I’d say they were each the size a bear cub, and they were covered in a thick coat which must have been a brown, definitely not black because I wouldn’t have seen them at all, but for the glowing eyes.

Anyway, they were sat up there looking down and it felt like they were looking right at me. The lights were on in the carriage so I’ve no doubt they could see me.

And now this is why I have never told anyone. As the train crunched into gear and began moving, one of the ‘creatures’ raised its hand or paw or whatever it was, and waved.

I remember being sure it was waving at me and I instinctively waved back!

Whenever I’m at the station I look for them in the trees but have never seen them again.

I’m not saying they were Faerie, but I don’t know what they were. Not any animal I’ve ever seen before, ever, let alone in a Wicklow tree!